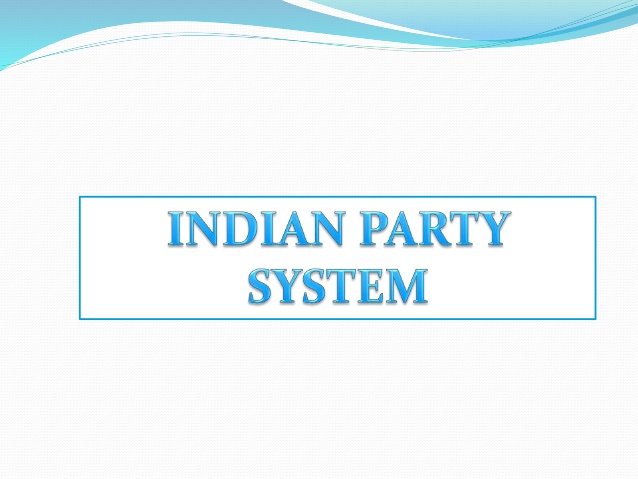 Trends in Indian Party System: From the Congress System to Multi Party Coalitions

A party system is a concept in comparative political science concerning the system of government by political parties in a democratic country. The idea is that political parties have basic similarities: they control the government, have a stable base of mass popular support, and create internal mechanisms for controlling funding, information, and nominations.

The political party is a link between the people and the state. Political party is a necessary part of modern politics. The institutions and organizations are required to represent the interests of the citizens. In a pluralistic political order, various organized groups work in the political process. The groups articulate their interests and parties aggregate them. This interaction works in the form of political parties. It mobilizes and competes for popular support on the basis of the program of policies and activities which requires a democratic climate and an electoral process.

The origin of the party system in Indian politics is largely a result of historical development with the formation of the Indian National Congress in 1885. Then a well organized national movement was allowed for independence. It had a mass base also. After independence single-member constituency or first past the post system was adopted. India has evolved a unique party system which combines the functions of providing a stable framework of authority with a wide range framework for disputes and resolution of conflicts at various levels of society. It is a competitive party system in which the competitive parts play rather dissimilar roles. It consists of a party of consensus and parties of pressure.

The period between 1952 and 1967 in India's party system is characterized by the dominance of the Congress and the existence of smaller opposition parties for both at the centre and the states. The social background of the Congress leadership and its important role in the winning of the country’s independence played a key role in placing it in a dominant position. Most accounts of the Congress party emphasizes the role of Nehru in the construction of a high modernist India where the state will be in charge of Nation-Building and economic development. The appeal was to adhere to the ideas of Socialism, Secularism Democracy and Federalism. The Indian National Congress (INC) was ruling without coercion. Dominance by a single party coexisted with inter-party competition.

1967 To 1977: Period of Dominant Party and Opposition at the State Level

The year 1967 had created a situation during which the congress dominance was strikingly reduced. Despite the strong opposition, the Congress won the general elections of 1971. Although same year parliamentary and state assembly elections were delinked. In this phase, the central role of the Congress party persisted but at the same time, anti-Congress alliances also started emerging representing a consolidation of the non-Congress space at the state level. The dominant party model had shown the way to the differentiated structure of party competition. Then parties started aligning to make coalition governments. The imposition of Emergency in 1975 led to the erosion of the popular support of the Congress party, a decline of the institutions, and weakening of the party system by suspending freedom of press and representing the government.

1977-1989: Conflict between the Congress and Regional Parties

1977 Elections saw the defeat of the Congress and restoration of its rule in 1980. This period showed the possibility of the emergence of a two-party system. But the possibility of this got failed due to the disintegration of the Janata Party and the dramatic reversal of the Congress in the power. The return of the Congress was very different from the earlier period. The initial stage marked respect for the opposition but this phase reflected intolerance and exclusivist leaders with no sharing of power. After the assassination of Indira Gandhi in 1984, emotional support was extended to Rajiv Gandhi and the Congress. Then various electoral majorities in a fragmented party system emerged where national parties did not command widespread support across all regions of the country. The new political situation after the 1984 elections showed the dominance of Congress at the centre but not in most of the states.

2004: Revival of Congress and Coalition Government

The 2004 elections gave an opportunity to all non-NDA political parties to evolve an alternative political coalition led by Congress in the name of UPA (United Progressive Alliance). The regional parties also had played a significant role. It appeared that any party wishing to win a national mandate has to weave its way through the different states and secure a verdict in each of these. This change in the party system with a decline of the strong base, the increased representation of regional parties, regionalization of all parties, continuous increase in the competition are some of the crucial factors in explaining the changed system of government formation.

In 2014 India again had a single-party majority after 1984 in the name of BJP. The reason behind the BJPs success in 2014 is due to its regional stronghold. 75 percent of the BJP’s parliamentary tally in 2014 came from just eight states in the north, west, and central regions of the country. During the 2019 election, the BJP clinched a second consecutive majority in the Lok Sabha. The competitiveness that has prevailed in the system in recent decades means that a small share of candidates are winning elections with the support of a majority of voters in their constituencies.

After independence only educated rich class got the chance to be elected as people’s representatives. However, in recent years, the trend has changed. Now S.C., S.T. farmers, and women too, are getting a chance to contest and win elections. Political participation of minorities, Scheduled Caste, and Scheduled Tribes has increased. The last decade has recorded unending multiplication within the number of political parties and fictionalization of the political space, the increase of regional/caste-based political parties that threaten to unleash fissiparous tendencies, end of ideology-based politics, decline in political morality, political corruption, and criminalization of politics. While urban middle class were busy bashing politics and politicians, the democratic space provided by electoral politics was being used more deftly by marginalized social groups who voted not as individuals but as groups and more often used their rights to reject very frequently.