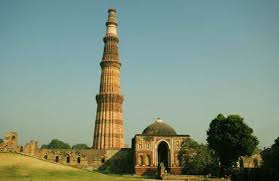 The settlement-history of Delhi during the Sultanate period dates from the twelfth century when it was occupied by Qutbuddin Aibak on behalf of Shahabuddin of Ghor in AD 1192. The oldest city of Delhi was enveloped in the Lal Kot which is known in the Persian sources as Qila-i Rai Pithora. The walls of this city can be traced around the Qutb Mosque. After the Turkish conquest, the city underwent a complete transformation.  The small fort amidst the present ruins on the rocky ground became the nucleus of Delhi, referred to in the fourteenth century as Dehli-i Kuhna or “Old Dehli”.

Delhi became to grow enormously after it became the capital of the Turkish Empire, popularly known as Delhi Sultanate, under Sultan Iltutmish (1211 –1236). Delhi has several advantages to its credit which facilitated its growth as a commercial metropolis, as well as an imperial camp. The Yamuna was navigable the year around as far as Delhi which facilitated the growth of a flourishing riverine trade.  Delhi not only developed as an administrative centre and a commercial metropolis but a vast military camp, especially during the fourteenth century. The settlement of Siri and Tughlaqabad was primarily the imperial camp.

Siri is the creation of the reign of Alauddin Khalji (1296 –1316). The combination of the Ogetai and Chaghatai hordes in Central Asia under the leadership of Qaida gave a new intensity to the Mongol raids into India. There was a sudden increase in the Mongol striking power from Alauddin’s reign and the entire Doab, and even territories beyond Ganga lay within the range of Mongol attacks. Delhi itself became the target of the Mongol attack. It became necessary to keep the population within fortified walls and for it, the vicinity of some rocky zone where the supply of stone was easier would have been an ideal option. Siri had served Alauddin Khaljias headquarters at the time of recent Mongol attacks. Hence, he decided to build here a new fortress which was, however, completed by his successor Qutbuddin Mubarak. Ziauddin  Sultan Alauddin built his palace in Siri and began to reside at Siri; he designated Siri his capital and made it well populated. He also built up the fort of Old Delhi. Yazdi, a fourteenth-century historian, has described the location of Siri in his Zafarnama to the north-west of Jahanpanah, while Qutb Delhi or Dehli-i Kuhna was located to its south-west. A tank, Hauz-i Khas was excavated by Alauddin Khalji to meet the water requirements of Siri and Qutb Delhi. It was located two miles south of Qutb Delhi. Even though Siri was proclaimed the Darul-Khilafa by Alauddin Khilji, it always remained “an isolated extension of Qutb Delhi”.

Tughlaqabad – The Imperial Camp of the Tughlaqs

The militaristic character of Delhi may be witnessed again in the layout of another settlement Tughlaqabad, named after its founder Ghiyasuddin Tughlaq (1320 – 1325). He was a great warrior and guarded the frontiers of the Delhi Sultanate against the Mongols for a considerable period. Tughlaqabad sits upon a southern terminal of the Ridge towards the Yamuna. As Athar Ali puts it: The advantage of the site lay in its stone quarries which provided building material, and the scraps that could be used to reinforce the elevation of the fortifications. There was the possibility too of setting a dam against the natural eastward drainage line, which narrowed here; and so of creating a tank and source of water supply.  A tank of enormous dimensions was made under the fort. Tughlaqabad was a detached complex to house the Sultan, his retinue, and personal troops. Old Delhi still retained its status as a commercial as well as an administrative centre. Tughlaqabad ceased to be the seat of the ruler after the accession of Muhammad bin Tughlaq.  Muhammad bin Tughlaq also built another fortress Adilabad, in its vicinity, with which Tughlaqabad is connected by a causeway. It shows the importance of the complex as an army encampment. He is also alleged to have built up an unprecedentedly large force within a very short space for his so-called Khurasan project, and this force was stationed in and around Delhi, which is clear from the contemporary accounts.

The Masjid-i Jami, or Qutb Mosque, was the “focal point in the social life of the city‟s Muslim inhabitants. Apart from its importance as a place of Friday prayer, it was also the place where protests were voiced, teaching and adjudication heard and festivals celebrated”. The main commercial areas, the Bazar-i bazzazan or the market of the cloth merchants, were located in the south of the Masjid-i Jami, and the grain market was also in its vicinity. The Qutb Mosque underwent constructions on three different stages. The first mosque was rectangular, with a small courtyard, surrounded by collonaded arcades and it was built of the material derived from plundered temples. Qutbuddin Aibek commenced the construction of the mosque immediately after the capture of Delhi in 1191 –92 and it was completed around 1196. The second phase of construction within the Masjid-i Jami commenced during the reign of Sultan Iltutmish and was completed around 1229–30, which doubled the width of the mosque. Iltutmish also made his tomb in its close vicinity that goes well with the whole architectural scheme. The third phase of building began during the reign of Sultan Alauddin Khalji. The girth (belt) of the unfinished minaret also indicates that it would have been twice the size of the old. The Alai Darwaza stands as a testimony to the quality of construction during the period, and as a superb specimen of the Indo-Islamic style of architecture that developed in Delhi about the beginning of the fourteenth century. It was constructed under the supervision of the immigrant Muslim architects, but it also carried well the indigenous working techniques and motifs which were then integrated into the vocabulary of the building art.